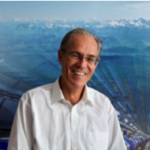 Patrick FASSNACHT started his career in Experimental Nuclear and Particle Physics at the University of Strasbourg in 1979. Later moving to the Centre de Physique des Particules in Marseille he also shifted his focus to High Energy Physics joining the CPLear (asymmetry matter/anti-matter) collaboration and finally to ATLAS (one of the four large LHC experiments at the LHC (Large Hadron Collider)). To the latter he contributed as Test Beam coordinator and later, for six years, as Technical Coordinator of the ATLAS Liquid Argon Calorimeter system. He was responsible for getting the calorimeters assembled, integrated into the cryostats and commissioned.

From April 2004 onwards, for a period of more than six years, he was acting as CERN ATLAS Team leader, leading a group of close to 200 users. During that period he had numerous interactions with the many ATLAS Users coming to CERN; which lead him to become an Advisor to the DG for the MENA, 2012 onwards. Since 2018, Patrick is also the Vice President, Communications of SKF.