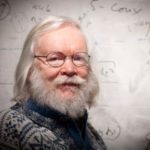 John ELLIS is the Clerk Maxwell Professor of Theoretical Physics at King’s College in London. After his 1971 PhD from Cambridge University, he worked at SLAC, Caltech, and CERN (Geneva), where he was Theory Division Leader for six years. His research interests focus on the phenomenological aspects of elementary particle physics and its connections with astrophysics, cosmology and quantum gravity. Much of his work relates directly to interpreting results of searches for new particles. He was one of the first to study how the Higgs boson could be produced and discovered. He is currently very active in efforts to understand the Higgs particle discovered recently at CERN, as well as its implications for possible new physics such as dark matter and supersymmetry.

He also studies possible future particle accelerators, such as the Compact Linear Collider (CLIC) and future circular colliders, and is known for his relentless efforts to promote global collaboration in particle physics. John Ellis was awarded the Maxwell Medal (1982) and the Paul Dirac Prize (2005) by the Institute of Physics. He was elected Fellow of the Royal Society of London in 1985 and of the Institute of Physics in 1991, has several honorary doctorates and is an Honorary Fellow of King’s College Cambridge and of King’s College London. He was awarded a CBE in the Queen’s Birthday Honours in 2012.