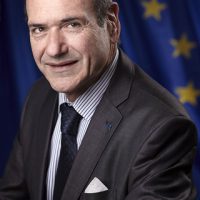 With Graduations in International Law and Political Science, he has dedicated his whole career to the European integration. In 1978, he begins by working for the French Prime Minister (Raymond Barre) in the legal department of the S.G.C.I., now S.G.A.E. From 1981 to 1989, he served at the European Court of Justice as First Secretary at Law of the French Judge, and at the European Court of Auditors as deputy-Legal Counsel and Director of the President’s Private Office. In 1989, he joins the European Investment Bank where he is appointed Spokesperson and Director of EIB Group’s Communication. In late 2003, he becomes the EIB Group Representative in Paris, also in charge with the institutional liaison with non-EU International Organisations. Although retired since end of 2016, he has kept various responsibilities such as Board Member of the French Institute for PPP(IGD), Paris, and Member of the Advisory Board of the FEMISE Network, Marseille and Cairo. He is also Member of the Scientific Councils of the Sharing KnowledgeFoundation, Geneva, of the Association Euromed-IHEDN, Marseille and Paris, and has joined the “Groupe d’analyse JFC Conseil”.Ordre du Mérite européen : Silver Medal.