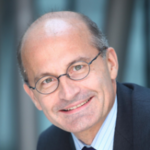 Philippe DELLEUR is Senior Vice President, Public Affairs in Alstom. Between 2011 and 2015 he was SVP, International Network and President of Alstom International. He joined Alstom in 2006 as Senior Vice President South Europe-Africa- Middle East, then SVP Latin America and President of Alstom Brazil. Before joining Alstom he worked in the French Ministry of Economy and Finances for 23 years, notably as Managing Director of the Public Procurement Agency, Deputy Secretary of Trade and member of staff of the Minister of Economy and Finance, Michel Sapin. He is a graduate of the ENA (French National School of Administration), Sciences Po Paris and holds a Law Degree.