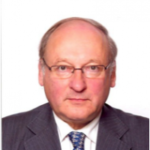 Bruno Weymuller has been Executive Vice President at Total, member of the Executive Committee (2000-2008) in charge of Strategy and Risk Assessment. After joining Elf Aquitaine group in 1981 he has held various management positions in the upstream division both in France and abroad, and has been Chief Financial Officer from 1994 to 2000. He has begun his career in the French civil service at the Ministry for Industry from 1972 to 1978. He joined the Prime Minister Raymond Barre’s cabinet from 1978 to 1981.

He is presently director in the board of the French Energy Council. He is a professor at « L’Institut Français du Pétrole et des Énergies Nouvelles. » and a member of Total Professors Associates. He works on the economics of energy and on the interactions between energy and environment. Bruno Weymuller is an alumnus from the École Polytechnique. He is also a graduate of the École des Mines in Paris. He holds a Master of Science of the Massachusetts Institute of Technology (Harkness Fellow).