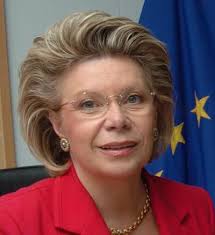 One of the mainstays of our action is to facilitate the mobility of scientists, a necessary condition for “Sharing Knowledge” and the scientific development of Southern Countries.

Following our meeting “From Brain Drain to Brain Gain”, held in Geneva in January 2009, “Sharing Knowledge (5), held at Amman in March 2010 heard again about the difficulties encountered by our Southern Colleagues when fulfilling research assignments in the framework of international agreements. A specific recommendation was adopted for that purpose.

In the meantime, we have received the answer to a note that we sent as soon as January 2010 to Viviane Reding, Vice President of the European Commission in charge of Justice, Fundamental Rights and Citizenship.

In response to the text prepared by Jean-Patrick Connerade, member of our Scientific Committee and President of the “People” Commission set up by the DG Research, the Vice-President has commissioned  the DG “Justice Liberty and Security”, in collaboration with DG Research, to prepare an analysis of the situation of Third Countries researchers working in the European Union.

This is an important document which should guide our action in the coming year. It shows that the Commission has been remarkably responsive to the needs in matter of visas expressed by the scientific community and that its proposals have been  approved by the Parliament and by the European Council.

We therefore have to conclude that the difficulties encountered by our colleagues are caused by the fact that European decisions do not yet translate into the different administrative and consular practices of Member States. It is therefore in that direction, collaboration with Institutes that have concluded agreements with Southern Countries that we should henceforth orient our action.

Governments should realize that human mobility and the establishment of knowledge-based economies are essential drivers of innovation and economic development, with diasporas playing key roles. Whilst  some improvements are within reach, e.g., the establishment of European scientific visas, some problems remain, e.g., with complicated procedures and visas enabling the free movement of researchers within the MENA region. The SKF recommends the certification of MENA and European institutes participating in joint education and research projects to facilitate visa procedures for their scientists along the same lines as existing arrangements for industrial partners in R&D and business.