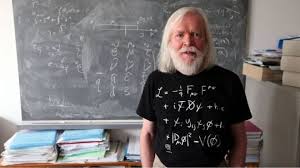 On 10 December 2009, John Ellis, a member of our Scientific Committee, was awarded by the Karlsruhe Institute of Technology the prestigious “Julius Wess Award” for outstanding achievements in Elementary Particle and Astroparticle Physics. John’s work covers a very broad spectrum of theoretical particle physics. In particular, he has often been able to suggest what type of experiments would prove theoretical expectations. A memorable example was the the discovery of the gluon in the 70’s, and he now concentrates on experiments at the LHC, particularly on searches for the Higgs boson and supersymmetric particles. As Adviser to the Director-General of CERN, he is responsible for relations between CERN and Non-Member States, which is particularly relevant to the goals of “Scientific Dialogue” of our Foundation.